The Great Lakes Water Quality Agreement (GLWQA) is “a commitment between the United States and Canada to restore and protect the waters of the Great Lakes”, which was first established in 1972. The defined purpose of the GLWQA is “to restore and maintain the chemical, physical, and biological integrity of the Waters of the Great Lakes”, and is used as a framework to tackle these binational issues. The agreement is updated every 10 years and is organized into 10 “Annexes”, as follows: 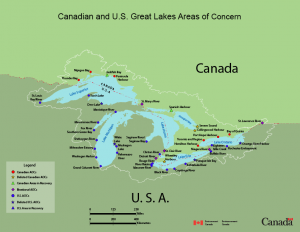 Map of Canadian and U.S. Areas of Concern

GLWQA and Georgian Bay (and GBA)

Since Georgian Bay falls under the GLWQA, the GBA has a strong interest in remaining involved and up to date with the action plans and achievements on these 10 GLWQA Annexes. GBA has provided input on the GLWQA since its inception in 1972, but more recently: 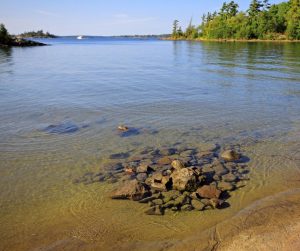 Water quality has arguably been the top issue for the GBA associations and members on a consistent basis since GBA was formed in 1916. The formation of GLEN, and GBA’s key role in it, provides you and GBA with a mechanism to effectively leverage input on the GLWQA from a very wide group of subject matter experts. GLEN will have an integral role in shaping the next 10-year GLWQA Agreement and intends to provide ongoing input and comments on GLWQA progress for the foreseeable future.

Over the spring and summer of 2022, in preparation for the 50th anniversary of GLWQA, GLEN put together a series of public webinars to gather comments on the agreement – its past and its future. The GLEN public webinar events offered one of the best opportunities since 1972 for GBA and its members to make their voices heard with governments on both sides of the border regarding water quality issues. The findings from these webinars are being presented at an event at the 2022 Great Lakes Public Forum on September 27 in Niagara Falls Ontario. GLEN has released a summary of the highlights of the the Great Lakes Water Quality Agreement at Fifty and the full document. These show both the accomplishments over the last 50 years, and the shortcomings and failures.

Part of the GLWQA mission was to identify and address Areas of Concern (AOC) within the Great Lakes system. Two of these AOC were located in Georgian Bay and they were Severn Sound and Collingwood Harbour. As of 2003 and 1994 respectively, these two AOC have been delisted which means that the concerns have been addressed.

Over the years GBA has worked with our GB4 colleagues to provide input on the Lake Huron Lakewide Management Plan. GBA has also regularly participated with our NGO colleagues, such as the Canadian Environmental Law Association, on detailed submissions regarding Chemicals of Mutual Concern and other GLWQA issues.

GBA has been monitoring and reporting on ballast water issues since the link to aquatic invasive species was established.