TC Energy (TCE) is proposing to construct a large pumped storage facility just north of Meaford on land owned by the Department of National Defense (DND). The project is at the feasibility stage and TCE and DND are currently holding consultations on the proposal. (TCE is the new name for TransCanada Corporation and is the majority shareholder of TransCanada Pipelines.) 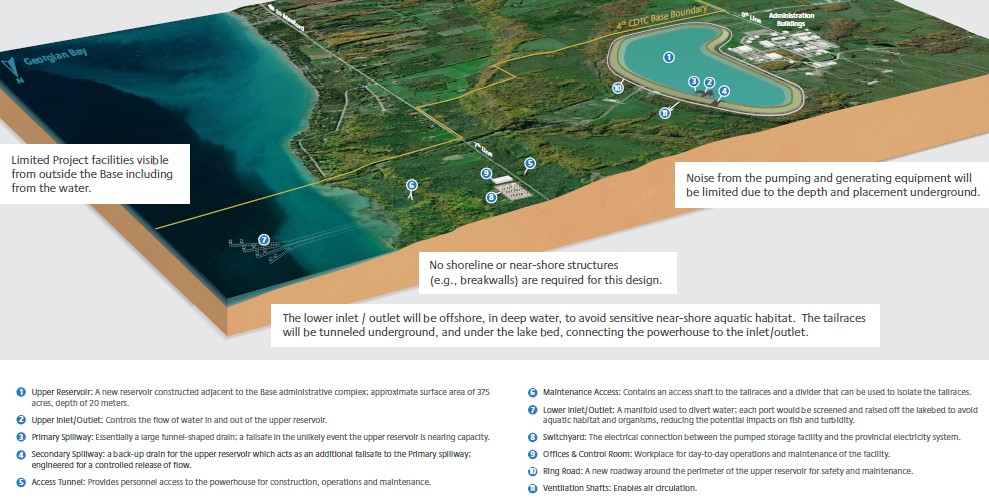 As per the diagrams, water would be pumped out of Georgian Bay via tunnels into the reservoir above at low off-peak hydro rates, when most of Ontario’s energy needs are being supplied by low-carbon energy sources such as nuclear and wind energy. It would then be released down the steep slope through the same tunnels, back into Georgian Bay, to generate power at peak demand times, when there is a higher use of natural gas-fired power plants. The current site was selected in part because it provides 150 m of vertical elevation above the Bay and is within 100 km of a power grid that can handle the level of power the project is projected to produce. 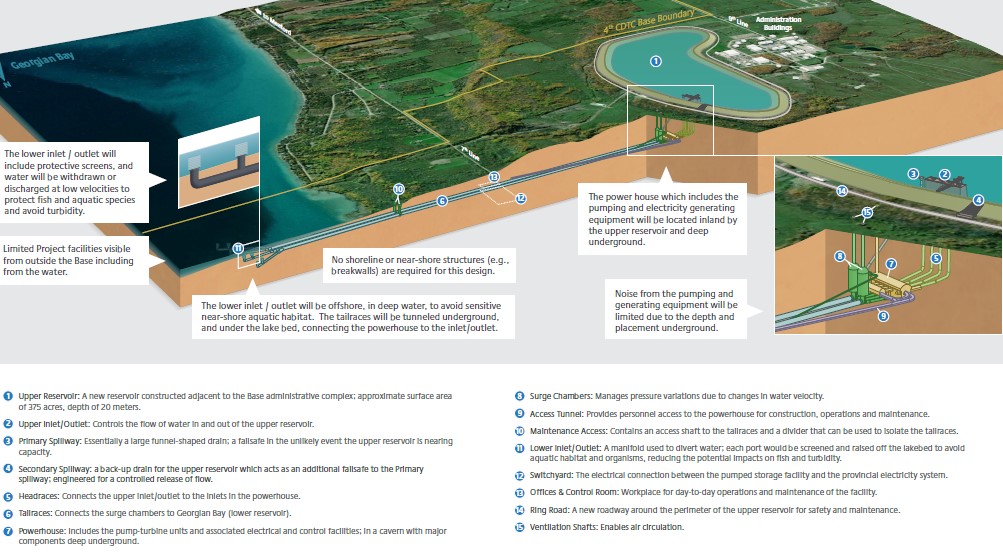 Although the project is proposed for a site on the west coast of the Bay, GBA is examining this project because we have several concerns about its potential environmental impacts on Georgian Bay, notably a potential increase to fish mortality, water turbidity, water temperatures, and habitat destruction. These impacts could affect greater Georgian Bay, and we are concerned about the precedent it will set.

At this stage, GBA has gathered additional information on the proposal from TCE, DND and a local group opposed to the project, Save Georgian Bay. As we move forward, we will continue our research and discuss our findings with all appropriate stakeholders. We will continue discussions with TCE about the design of the project and plans to address and mitigate potential environmental impacts.

The main potential benefits of this project include:

TCE commissioned Navigant to do an economic analysis of the project, which includes calculating potential CO2 emissions savings. Navigant based their calculations on a range of future Ontario energy sector demand and supply scenarios, and show average CO2 emissions savings of around 490,000 tonnes per year, and potentially more. GBA has requested further clarification of these assumptions to better understand how the projected savings will be realized.

By capturing excess power that would otherwise be wasted, and releasing it when needed at peak times, the project would enhance the efficiency, flexibility, reliability and security of the Ontario electricity supply system. It would also provide back-up power during grid disruptions and better integrate other power generation facilities in the province. Collectively this grid balancing would reduce costs of electricity for Ontario consumers by an estimated $250 million per year.

Intake/outflow system
The main potential negative impacts of this project relate to the design of the water intake/outflow system to be deployed. Since GBA and others have been expressing our concerns about the potential entrainment of fish and other aquatic biota, turbidity, sediment disturbance, and impacts on fish habitat and currents, TCE has made significant changes to the project’s design. The new design will:

The original design was conceptually similar to the Ludington pumped storage project in Michigan, that demonstrated consistently high rates of fish entrainment and other impacts, even after a successful lawsuit forced the installation of a net system to mitigate the damage.

TCE’s updated design addresses many of the original concerns of GBA and demonstrates that we can be cautiously optimistic that community feedback, and efforts by GBA and others, will now lead to substantial mitigation of potentially severe environmental impacts should the project proceed. GBA is still concerned and will follow events closely to ensure that the expected improvements from the design changes unfold as advertised.

Disturbance of any significant quantity of lakebed sediment and bringing sediment down from the reservoir into the Bay that could be dispersed over a very large area of the Bay is a concern for GBA, because the DND has used this site as a training facility and firing range for decades. There may be various pollutants, including heavy metals, in the sediment that could be released into nearby waters.

The outflow from TCE’s reservoir could also potentially warm the water and disrupt water currents in Georgian Bay.

There are 11 animal species at risk recorded on the Base whose habitat could be destroyed or compromised, both from construction activity and potential displacement of 375 acres of Niagara Escarpment to create the reservoir. The endangered butternut tree also grows on the Base. The recent design changes with facilities moved underground show promise in reducing surface disturbances and the potential impacts to species at risk.

TCE has proposed two solutions to connect the project to the provincial grid at Barrie – an overhead transmission system, or a subsea solution that would cross Georgian Bay. The subsea solution, the preferred transmission option for the project, could disrupt lakebed sediment and potentially impact the local marine environment and water quality.

The other option that will be evaluated is an on-land transmission route. While most of the hydro lines needed to connect to the grid at Barrie would be constructed along existing power corridors (with minimal impact), new sections may be required. These could cause some ecosystem damage, along with habitat disruption or destruction.

What is GBA doing?

Save Georgian Bay has a petition underway that has ~40,00 signatures to date. The group has assembled relevant engineering, environmental consultancy, and biologist skills to back up their opposition and has submitted a comprehensive assessment of this project to the Department of National Defense here.

TCE have entered into discussions with SON regarding their participation in the project. Materials from their information session can be found here.

TCE’s recent letter to the community can be found here. Additional information posted by TCE on this project can be found on their website here.