Human health and economies are also at risk from invasive species. The impacts of invasive species on our natural ecosystems and economy cost billions of dollars each year. Many of our commercial, agricultural, and recreational activities depend on healthy native ecosystems.

Here are some of the biggest threats to the lands and forests of Georgian Bay: 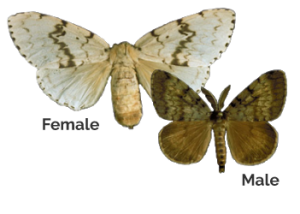 The “LDD” moth derived from the scientific name Lymantria dispar dispar, devours the leaves of more than 500 different species of trees and shrubs and can cause large-scale defoliation. 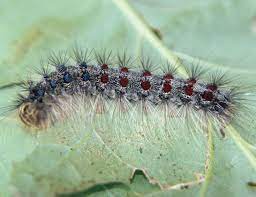 Caterpillars are hairy, up to six centimetres long and can be identified by the five pairs of blue dots and six pairs of red dots on their backs. The adults have a wing span of about 1 1/2 inches. The male moths are brown and fly, while the adult females are white and can’t fly. Eggs masses are laid on branches or other sheltered places. The masses are buff colored when freshly laid and will pale as they age.

The moth caterpillars have voracious appetites and eat a wide range of food, including oak, birch, poplar, willow and maple, unlike many other caterpillars that are pickier eaters. They also feed for almost twice as long as many native caterpillars. While some birds and mammals do eat gypsy moths, none of them consume enough to really put a dent in the population. Under the right conditions a species of fungus, Entompophaga maimaigi, and the virus group, Nucleopolyhedrosis, or NPV can infect large populations of gypsy moths causing population declines.

What Can You Do?

If you have an infestation on your trees during the mid summer months, the experts suggest a technique that involves tying a band of burlap around the tree trunks at about chest height. The caterpillars are drawn to the shade and will hide under the burlap where they can be easily picked off.

After Labour Day, when the adults are done laying eggs, you can also find their egg masses and use a butter knife or painter’s scraper to remove them from the trees. An illustrated guide on how to remove eggs can be found here.

Btk (Bacillus thuringiensis kustaki) is a naturally occurring bacteria that targets the caterpillars and has previously been used along eastern Georgian Bay to control LDD moths. Btk is used in aerial spraying programs which need to take place between April and June when the caterpillars are actively feeding. Btk produces a protein that causes LDD caterpillars to stop feeding and consequently die within 2-5 days after ingestion. Aerial spraying is time and weather-sensitive and there is a very narrow window where treatment can be applied. Products for aerial spray must be purchased and applied by licensed pesticide applicators. Zimmer Air Services has information on application here.

TreeAzin can also help to control LDD populations and save individual trees. It was used recently in the Georgian Bay area to protect white pines.  TreeAzin is injected into the tree and is ingested by the caterpillars when feeding on the leaves. More information on TreeAzin can be found here.

There are also a number of different pheromone traps that can be made or purchased. These traps use the lure of powerful pheromones to attract and trap the male moths disrupting the reproductive cycle. Traps should be installed at the end of July when moths start emerging from their pupae and taken down in late September. There are many YouTube videos (like this) that illustrate how to make your own LDD moth trap.

When will there be another infestation?

Predicting an outbreak is always tricky, but it’s safe to say the moths will be back next year in some capacity. These moths go through cycles where the populations build, decline and eventually collapse after two to four years. The NVP virus and Entomophaga maimaiga fungus can cause populations to go on the decline. Cold winter conditions (-20°C days) and wet spring conditions will also cause populations to wane.