GBA supports aquaculture expansion to meet the demand for fish products, but it should be sustainable, i.e. in closed containment systems. GBA continues to advocate for the open-net pen aquaculture operations in Georgian Bay and the North Channel to cease causing negative environmental impacts. We are active in persuading the federal government to require the industry to comply with the Fisheries Act and international standards and guidelines in proposed new aquaculture laws and regulations. 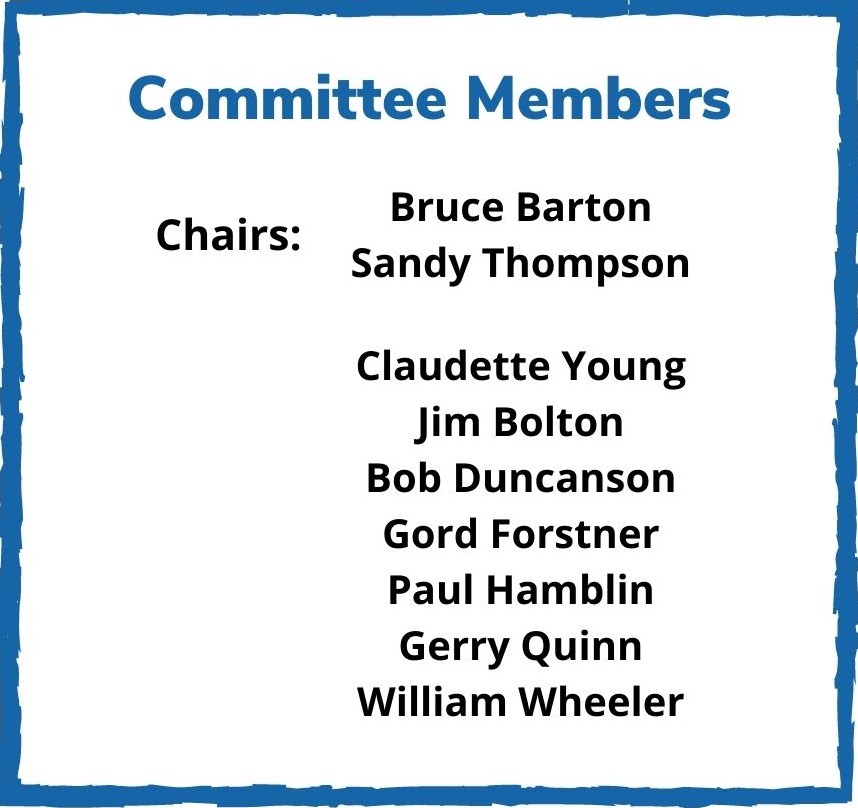 What is GBA Doing?

What can you do?

The main concerns of the Georgian Bay Association (GBA) and its stakeholders regarding cage culture operations in Georgian Bay and the North Channel, and the Great Lakes in general are:

Additional matters that should be considered:

GBA supports the development of aquaculture as a viable industry for Ontario, but insists that it is practiced in a way that is sustainable and has minimal impact on the environment. For that reason, we advocate the transition of open net-pen systems in Georgian Bay and the North Channel to either contained water-based systems, or land-based systems, in order to:

Transitioning to land-based fish farms is a growing trend in coastal Canada and globally, not only for environmental reasons, but also to ensure better operational control and a consistently high-quality market product. GBA considers that adopting a proactive approach to regulatory oversight of cage fish farms in the Great Lakes as well seems a more prudent step forward rather than a reactive approach to problems as they occur.

This is an aquatic example of ‘tragedy of the commons’, as the environmental cost is not suffered by the business owner, nor even reflected in the cost of the product, but will be borne by the entire public at some point in the future. 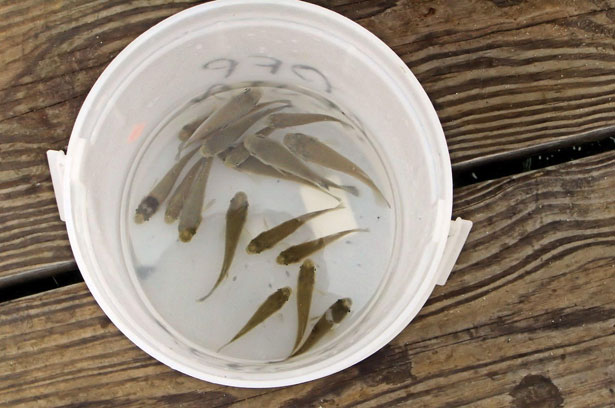 The Live Bait Industry is Significant Supplying bait is big business in Ontario and many anglers continue to support this industry by purchasing minnows, leaches, crayfish, and other live bait species as alternatives to using artificial baits and tied flies.   Potential Risks of Using Live Bait Historically, Ontario’s fishing regulations, were relatively unrestricted. For years, anglers faced few controls as to where bait was purchased, including how and where it was used and disposed of. Using live bait, considered illegal today, may have caused the spread of infectious fish diseases such as viral hemorrhagic septicemia (VHS). Disposing of live and dead bait fish, fish eggs, soil from bait containers, or other material into the water may also have jeopardized the ecol

Is Catch and Release a Good Idea?

The message from traditional Indigenous teachings is that catch and release is disrespectful to the fish (it can also harm their ability to eat properly after they are released) and one should only fish respectfully, which includes eating the fish we catch. Now it seems there is another reason to question this practice. Some bass are smarter than we might think, learn to avoid lures and can pass that knowledge down through the generations! Who knew! - Read more here. -

One of the most destructive invasive species in North America is knocking at the door of the Great Lakes. Asian carp (the designation which consists of silver carp, bighead carp, grass carp, and black carp) reproduce rapidly, monopolize food sources, push out native species, and even injure boaters. If they enter the Great Lakes, the basin’s ecosystem and economy will never be the same. This is primarily a US issue and funding is in place to counter this threat. GBA has compiled an update on what is currently happening to stop the spread of grass carp outside of Lake Erie and stop other Asian carp from entering the Great Lakes. Read the update here.

The Ministry of Natural Resources and Forestry manages the Province’s fisheries and provides an annual guide of Fishing Regulations. Georgian Bay and the North Channel of Lake Huron, including the rivers and countless streams running into these waters, are identified in the guide as Management Zone 14. Zone 14 offers recreational anglers excellent near and offshore fishing for popular fish species including walleye, small and largemouth bass, northern pike, muskellunge, yellow perch, chinook salmon and rainbow trout. Protecting and maintaining this fishery is achieved when the guide’s regulations, listing seasonal, size and catch restrictions, are followed. Zone 14 also has specific restrictions for Lake Trout and Walleye. These can be found by going to Fisheries Management Zone

Last fall, GBA submitted comments on the proposed changes to the rules for live bait in Ontario to address our concerns around minimizing the threat of  invasive species and the spread of diseases. After this consultation process, the province released new regulations for the sale and possession of live bait in July and many of GBA’s recommendations have been adopted. What has Changed? For anglers, the new rules limit the list of fish that may be used as bait to 34 fish species. These are native minnows, suckers, and sticklebacks while  several species of fish that resemble invasive species have been removed from the list to avoid confusion and maintain the cleanest source of bait possible. The complete list of permitted baitfish can be found here. To control bait wastage, ang 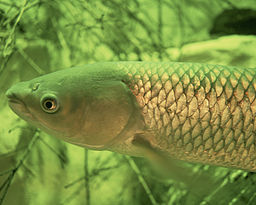 Scientists in Toledo Ohio are on the front lines in the battle to stem the spread of grass carp, one of four invasive species of fish that fall under the Asian carp umbrella. Although the more public threat is bighead and silver carp near Lake Michigan, grass carp are threatening to spread within the waters of Lake Erie. This species is particularly known for it's voracious consumption of aquatic vegetation, which could cause serious damage to both the ecosystem and the economy of the Great Lakes. - Although these invasives are not usually afforded the same threat level as the other asian carp species, a spread of reproducing grass carp to Lake Huron would severely impact Georgian Bay wetlands. GBA therefore keeps a sharp eye on the eradication and control measures being primarily carrie

- With the province of Ontario's decision to introduce an annual cormorant hunting season beginning this September, Canada's National Observer has researched the ins and outs of this upcoming hunt, including a lengthy interview with GBA, and produced a well balanced article which can be found here. Ontario Nature's Director of Conservation and Education has also written a thoughtful piece condemning the hunt here. On July 31, 2020 the province of Ontario announced the introduction of an annual fall hunt of the double-crested cormorant as a step to protect fish stocks and natural habitats. Scientific studies indicate that cormorants do not pose any current threat to native fish populations. This research and GBA's commentary on the hunt can be found here.

Ontario Government Has Listened and Amended the Cormorant Hunt Regulations

- Following public consultations, the province of Ontario has made changes to its initial proposal and has decided to introduce a hunting season that will run annually from September 15 to December 31, starting in 2020. The original proposal called for a longer season and a 50-bird a day limit with hunters able to leave behind dead or wounded cormorants. GBA highlighted significant public safety concerns in its submission to request that this hunt proposal be cancelled. We still have concerns that the science is being ignored, but appreciate the shortened hunting season, reduction in the daily limit from 50 to 15, and the requirement to retrieve the birds, rather than leave them to rot. The Ontario government’s news release on the hunt can be found here and the official details of th

Ever since invasive species started arriving in the ballast of lake freighters, GBA has been calling for tighter ballast regulations to protect the Great Lakes and Georgian Bay from the devastation that these invasive species can and have caused. In 2010, Canada acceded to the international ballast water convention, but the US did not. After 10 years working on these new regulations, which are aimed at significantly reducing the risk of further invasive species entering the Great Lakes and Georgian Bay, Transport Canada has finally put the proposal forward. Details of the proposal can be found here. The US has launched an investigation into the competitive fairness of Canada’s proposed ballast water regulations. See their response here.

- Your committee that addresses water quality and fish habitat issues arising from the open net pen aquaculture operations in Georgian Bay and the North Channel is looking for new members. Please consider joining this successful group of volunteers and help keep the momentum going. Read about the opportunity here. - 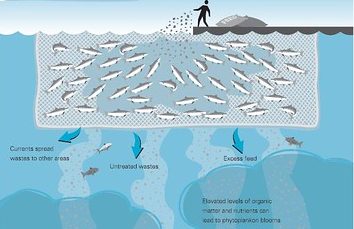 GBA is asking for open net cage aquaculture in Georgian Bay and the North Channel to be compliant with UN and Canadian regulations & standards. In our submission on the proposed Aquaculture Act, GBA recommends that the federal government ensures that these operations comply with the provisions of the Great Lakes Water Quality Agreement, the new Canadian Fisheries Act, UN Aquaculture guidelines and related agreements. Read GBA's submission and the details of why we believe they do not currently comply here: GBA Submission to DFO - Proposed Aquaculture Act Dec 3 2019 More information about the aquaculture issue can be found here. 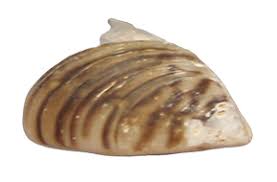 How To Kill Quagga Mussels

Scientists are currently researching various methods to control quagga mussels in the Great Lakes. Zebra mussels in Georgian Bay have been virtually eliminated by the far more impactful invasive quagga mussel, which has contributed significantly to large reductions in native fish stocks. Finding an effective and practical way to kill the quagga mussels is vitally important to both the ecology and the economy. Read more about the latest research here. -