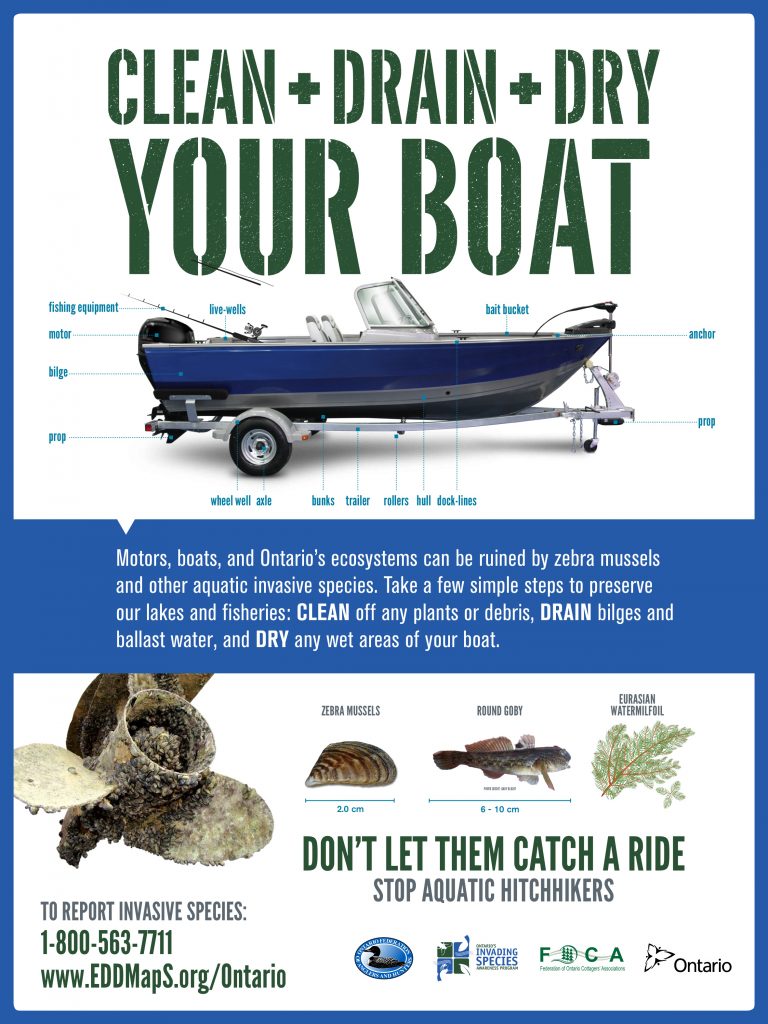 This year GBA has arranged a free supply of these signs for all GBA associations to place on dock ramps and at marinas to help stem the spread of invasive species between water bodies. This year’s campaign is styled: Be a Hero; Transport Zero

How to “Be a Hero, Transport Zero”

It only takes one person to create a problem.  Most boaters and anglers in Georgian Bay and Northern Lake Huron know that zebra mussels, round gobies, spiny water fleas, Eurasian milfoil and other invasive species harm the environment. But not everyone is doing something about it. Boaters and anglers ignoring the spread of invasive species threaten the local economies along Georgian Bay which rely heavily on tourism, recreation, commerce and real estate.

“Be a Hero, Transport Zero” is a campaign, recently developed in Illinois, that emphasizes ways to limit the spread of invasive species by making boaters feel good when cleaning and drying their gear and not transporting live bait from one lake to another.  Here on Georgian Bay and the North Channel, the vast number of trailered boats entering and leaving these waters makes fighting the spread of aquatic invasive difficult. When invasive species enter the Bay and nearby lakes and rivers, where they haven’t previously existed, there is often a decline in sport fish and milfoil so thick people are prevented from driving boats or casting lines through it.

In 2018, the Province of Ontario, in cooperation with the Federation of Ontario Cottagers Federation (FOCA) and the Federation of Anglers and Hunters introduced a “Don’t Let Them Catch a Ride” campaign by offering signs FREE to marinas and cottage associations where boat launching sites exist.

This summer GBA’s Fisheries Committee is pleased to offer these signs again free to all FOCA members and GBA associations. To place an order, simply email info@foca.on.ca  or contact GBA’s Executive Director  rkindersley@georgianbay.ca

When boaters or anglers fail to clean their boats and equipment or transport live bait from lake to lake, such risky behaviour should be reported to the Ontario Ministry of Natural Resources and Forestry’s Invading Species Toll-Free Hotline @1-800-563-7711 noting boat registrations and descriptions, photos, locations (GPS coordinates) and observation dates. For further information on invasive species and how to identify them go to www.invadingspecies.com