As nominated by Heather Sargeant 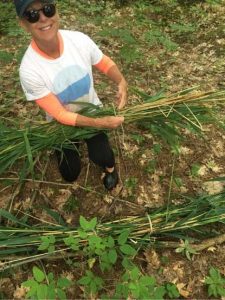 About 5 or 6 years ago, at an event jointly put on by the Georgian Bay Association, Georgian Bay Forever, and featuring Dr. Gilbert, an ecologist with Phragmites expertise , I first learned about invasive Phragmites and the harm it can have on wetlands.

I decided to investigate if Phragmites was a threat in Woods Bay (my favourite area of Georgian Bay), and that’s when my journey tackling this plant began.  I wasn’t sure if a plant across from the family cottage was indeed the invasive type, and so I was nervous and queasy about leading people to help me cut it.  What if it was the native plant, and I’d taken all these people out to cut down something benign?

One of my neighbors told me there was a hero on Georgian Bay who was tackling the plant in Honey Harbour – her name was Kathryn Davis.  I called her, and without hesitation she spent more than an hour talking to me about this plant and even invited me for a tour of some stands in Honey Harbour.  When I got to Honey Harbour, that’s when my real education on the plant began.  She showed me examples of what the invasive Phragmites plant looked like and the damage it was doing.  She also amazed me with the story of her journey tackling this plant.  All the energy she had expended and the resources that she had fought for and won became a huge inspiration to me, driving me to not only want to tackle this plant in my own community, but help others to do it.

Kathryns’s accomplishments over the years helping her community tackle this invasive plant are impressive and significant: 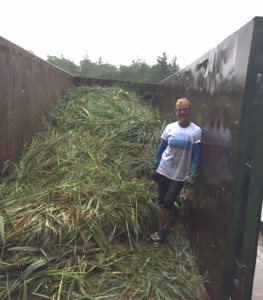 Kathryn has now decided to take a step back – deservedly – but not without having established a program, and a level of care and understanding in Honey Harbour that has allowed the successful transition and continuation of this phragbusting fight.

When it comes to Guardians of Georgian Bay, Kathryn Davis has gone over and above in her work to protect and preserve the Bay for us, and future generations.  Because of this, I wanted to nominate her as a Guardian.  Thank you Kathryn for being an inspiration and example for us all.