Georgian Bay for Everyone 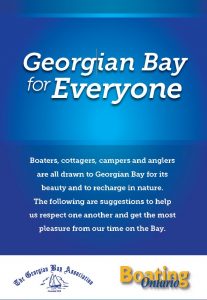 Our water based and largely water access community neccesitates sharing our water resources. All users of Georgian Bay share the same concerns about safe enjoyment and protection of our waterways. A wide variety of users frequent Georgian Bay and they include: kayakers, anglers, hunters, cruising boaters, day sailors, canoeists, contractors/tradespersons, guests, tenants as well as permanent and seasonal residents.

Georgian Bay for Everyone is intended to be a resource and a guide for shared enjoyment of the Bay. It replaces the Georgian Bay Boater and Cottager Code, originally printed Spring 2002 and updated 2005. It is our hopes that this pamphlet will reach a broader audience so please share it with other users of the Bay.

This pamphlet has been developed cooperatively by the GBA, cottage associations, representatives from the marine industry, boaters and input from the OPP. Both Boating Ontario and the Georgian Bay Association have contributed financially to printing costs. The indent is that it be reprinted by interested parties and their contact information can be added on the back page. 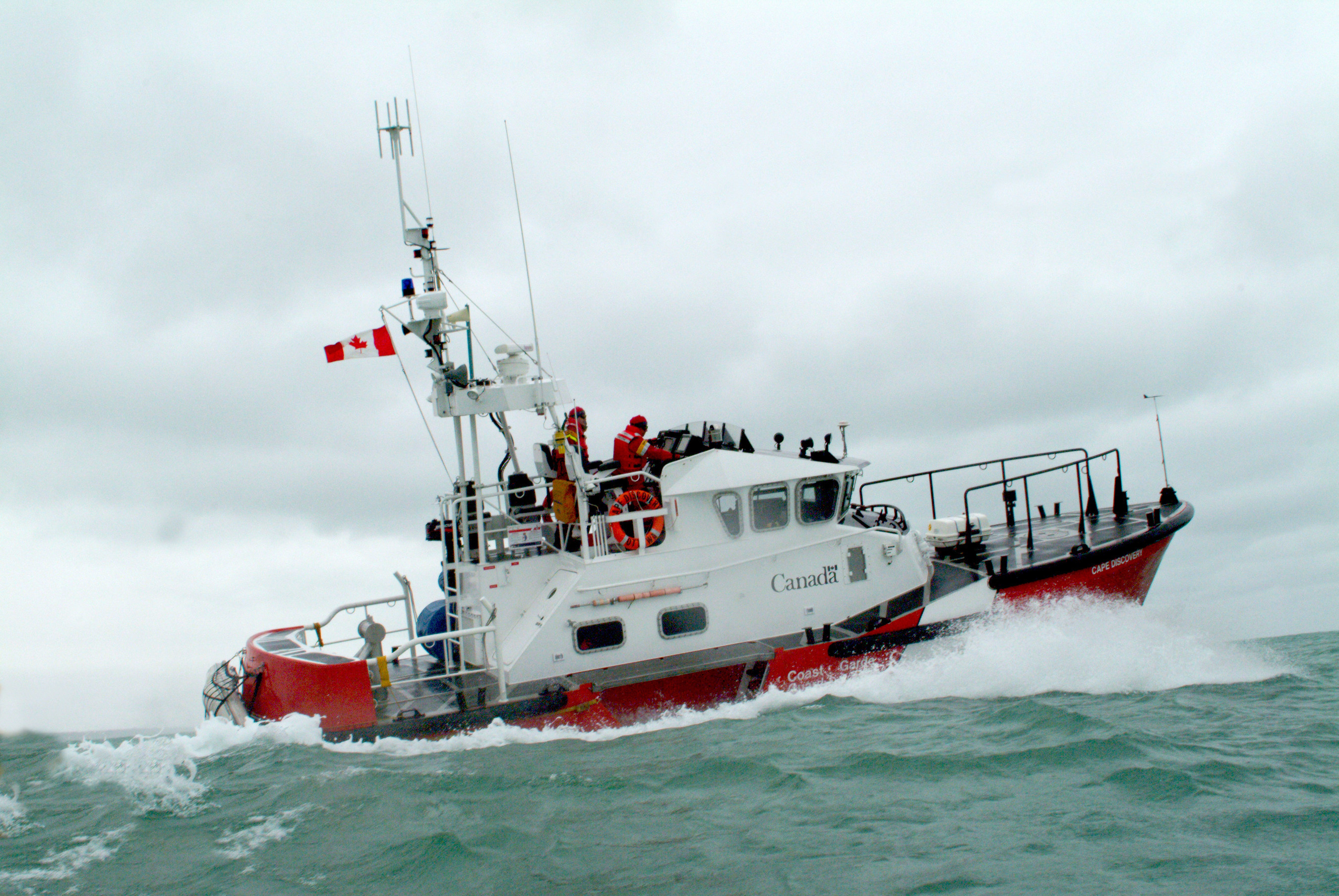 The Canadian Coast Guard (CCG) kicked off the 2021 boating season on Georgian Bay, opening their seasonally operated Search and Rescue Lifeboat Stations in Tobermory and Meaford on April 9. The CCG Auxiliary units are also getting up and running but are not at full strength yet. The Inshore Rescue Boat (IRB) stations located at Brebeuf Island and Britt have begun training their crews and will be operational for the Victoria Day long weekend. You can contact the Coast Guard 24 hours a day/7 days a week by calling 1-800-267-7270 or via marine VHF radio use channel 16. GBA suggests saving this number in your phone in case of emergency. CCG also wants to remind everyone that the water remains very cold at this time of year and a greater level of care is necessary when boating. Wearin

Two recent fatal snowmobile incidents have OPP warning people that no ice is safe ice and snowmobilers should stay off frozen waterways and closed trails. According to the OPP, six people have lost their lives in snowmobile accidents so far this season. Most recently, on January 17, three people died in separate incidents after their snowmobiles broke through the ice on Georgian Bay. - OPP statistics show that over the past ten years more than 40% of snowmobile fatalities have occurred on lakes and rivers. Excessive speed, driving too fast for the conditions and alcohol or drug impairment are also significant factors in OPP-investigated snowmobile incidents. The Ontario Federation of Snowmobile Clubs (OFSC) said a mild winter makes it particularly important for snowmobilers to regularly

The OPP is using the internationally recognized app what3words in all provincial call centres to direct first responders to precise locations for faster and more accurate emergency response. what3words has assigned a unique three-word tag to every three squared metres on the planet. By giving the 911 dispatcher the three words for your location, they can convert the tag into proper coordinates, pinpoint exactly where you are, and direct help. This tool is proving particularly useful in helping OPP officers locate parties in remote and forested areas where signal is limited and on vast waterways. Internet connectivity is not required to use the app. Only a cell signal and location services enabled on your phone are needed. Even if you don't have the app installed on your phone, the call

OPP Safety Reminders for Outdoor Activities During the Lockdown

As the first weekend of the provincial Stay at Home legislation lockdown begins, members of the Southern Georgian Bay detachment of the Ontario Provincial Police (OPP) want to remind all persons who do venture outdoors that area ice surfaces may be snow covered and appear safe to travel on. Unfortunately, locally we have not had the kind of cold weather required for the formation of ice required for winter activities so if ice travel is necessary please check with local residents and fish hut operators before heading out on any ice surface- Know Before You GO. Detachment officers will be on snowmobile patrol this weekend checking for impaired snowmobile operators as well as for proper equipment, permits and monitoring riders speed while on the Ontario Federation of Snowmobile Club

According to the Insurance Bureau of Canada between 25 and 30 Canadians die in ice-related incidents each year and many more have to be rescued. As the weather gets colder, it is enticing to want to venture out onto the ice. It is important to remember that the most dangerous time to be on the ice is in early winter and late spring when the ice can be less stable. If you are going out on the ice: always let someone know where you are going and when you expect to return know the waters under the ice you will be on - depth and currents can impact the thickness and strength watch the weather, as temperature fluctuations and precipitation may soften the ice avoid slushy ice, untracked ice or ice near moving waters or dock bubblers The following is a list of 10 Ice Saf

As Canadian winters are becoming warmer, new research suggests that youth are particularly vulnerable to winter drownings. In a recently published study looking at stats across 10 countries, children under the age of 9 made up 44% of the winter drownings that did not involve a vehicle. In cases with vehicles, such as snowmobiles, most of the deaths were in those younger that 24 years old. - The research found that most of the drownings occurred when the temperature was between -5 °C and 0ºC and often included other factors that can weaken ice such as freeze-thaw and rain events. Read more here.

Drownings in Lake Michigan reached a new record high in 2020. According to Great Lakes Surf Rescue Project, a nonprofit that tracks drowning statistics, there have been 97 drownings in the Great Lakes so far in 2020. 53 of these occurred in Lake Michigan, 9 in Lake Huron, 2 in Lake Superior, 15 in Lake Erie and 18 in Lake Ontario. The previous record for drowning fatalities in Lake Michigan was 49 back in 2019. There is speculation that this uptick may have been caused by closures during the pandemic. Read more here.

On October 1, 2020 the Canadian Safe Boating Council (CSBC) is taking their annual symposium online. The focus of this year's webinar is Shared Waterways: the Way Ahead. Shared Waterways was the theme of CSBC's 2019 Symposium in Port Credit (presentations can be found here), and the council is planning to follow up last year's discussions by adding some additional perspectives and determining next steps that can be taken both collectively and individually to address shared waterway issues. This is a free event from 12:30 - 3:35 on Thursday October 1, 2020. The agenda and registration information can be found here. -

Large and destructive wakes have long been an issue for cottagers, and the recent high water levels and shoreline conditions have made the problem much worse. The law states that power-driven vessels must slow down to 10 km/hour within 30 meters of a shoreline except in canals and marked channels. While most boaters are aware and respectful of the rules, there are others who are not.  Understanding the Impacts Large wakes can create unsafe conditions, be harmful to the environment, and cause property damage, notably: Hazards for swimmers and smaller vessels Large wake can cause dangerous conditions for swimmers and can even swamp smaller vessels. Shoreline erosion Wake combined with higher water levels can cause plants and trees to lose their root support and g

Operating a Personal Watercraft? Here’s What You Need to Know

Jet Ski, Sea-Doo or WaveRunner, these are all personal watercraft (PWC) and they are subject to the same rules as a every powered vessel on the water. What do you need to know if you are hopping on a personal watercraft? Age Restrictions You must be 16 or older to operate a PWC regardless of supervision and carry proof of age with you. Licensing There are two required licenses to operate any PWC: A Pleasure Craft License is the set of unique authorized numbers on the sides of your vessel. These numbers are issued by Transport Canada, must be properly displayed, and act as a permanent license plate for your PWC. A Pleasure Craft Operator’s Card (PCOP) is often referred to as a “boating license” or “boater card”, and acts as your driver’s license in the wate 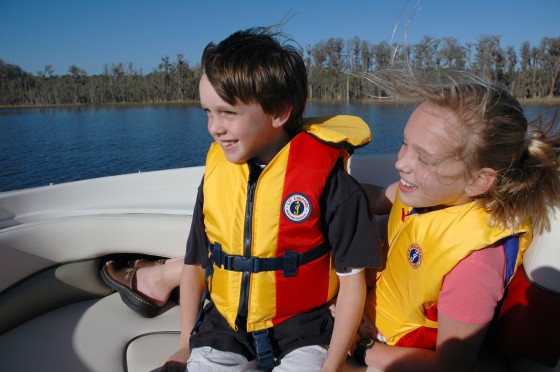 Are You and Your Passengers Wearing Approved Lifejackets?

Members of the OPP Marine Patrol attached to the Southern Georgian Bay Detachment of the Ontario Provincial Police (OPP) have recently come across a number of non-approved lifejackets while conducting their vessel checks on the waters Georgian Bay. The officers educated those vessel operators to ensure that their vessels contained sufficient approved lifejackets for each occupant of the vessel. These photos below are two of the non-approved lifejackets the officers found:   Vessel operators should check that their lifejackets have a label stating it has been approved by any of the organizations below: Transport Canada Canadian Coast Guard Fisheries and Oceans Canada Please take a moment to review the following Transport Canada regulations to ensure that you ha

To provide you with the most up-to-date overview, GBA will collect the relevant information and issue a Fire Danger Rating Report on Thursdays throughout the summer to get you prepared for your cottage weekends. This report is an amalgamation of the current information with links to the Ministry of Natural Resources and Forestry (MNRF) and your local municipalities. The MNRF map gives an overview of the conditions around Georgian Bay, and the local municipalities will have details on their ratings and what activities are allowable under the conditions. See the latest Fire Danger Ratings Report here.